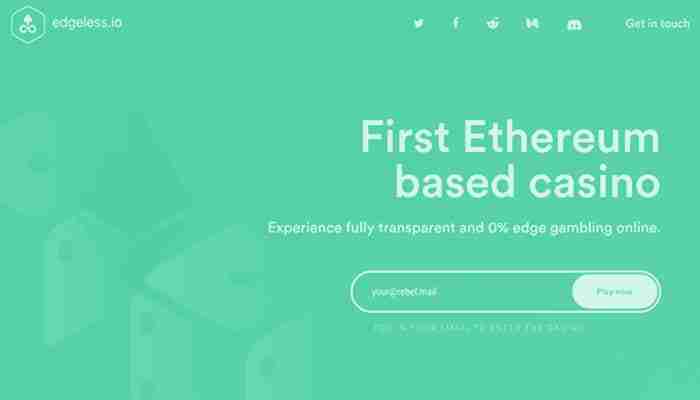 The online gambling industry recently became accustomed to yet another interesting development, not least because for the first time, a smart contract casino has received the green light for the issuance of a gambling license. Edgeless – whose decentralised casino platform is fuelled by the Ethereum blockchain, have boosted the reputation of cryptocurrency gambling operators by gaining mainstream approval from the Curacao Gaming Control Board. By issuing a licence, the Curacao authorities have effectively legitimized the ideology of the smart contract protocol. Will this be the first for many more to follow?

The recent news involving the Edgeless license was not the first time that the online casino made headlines. The smart contract start-up also became the first casino – across any format, to offer players a 0% house edge. You are probably wondering how they make money? The concept behind the Edgeless business plan is that they want to allow players to incorporate an element of skill within their gameplay.

For example, Edgeless offers blackjack players a 0% house edge, which if played perfectly, will increase their chances of walking away a winner. However, quite often players do not negotiate a perfect gaming strategy, and this is where Edgeless make their profit. Such a business model is highly reliant on significant volumes going through the platform. Nevertheless, it is plausible that the offer of a 0% house edge, along with the recently obtained Curacao license, will very quickly incentivise new players to join.

Edgeless, amongst other cryptocurrency casinos in the market, operate through Ethereum smart contracts. Essentially, a smart contract is a transparent, pre-defined set of conditions that allows two or more people to engage in an agreement.  The biggest selling point for smart contract utilization is that the technology is completely decentralized, meaning that each and every gaming outcome is fully verifiable on the Ethereum blockchain. This provides players with the guarantee of trust that they need prior to depositing funds. Ethereum casinos such as Edgeless are able to do this through the use of a provably fair protocol. This ensures that each outcome is determined by a cryptographically secure, random number generator – making internal malpractice impossible.

Market competition within the online gambling industry is extremely fierce – both in the fiat and cryptocurrency formats. The fundamental advantage that traditional casinos hold over Ethereum casinos is that they are fully regulated by a national gaming board. This provides players with a false hope that their funds are safe, and that the games they play will always be fair. As displayed in the countless amounts of media scandals, this is not the case – with a plethora of fiat casinos shutting down overnight without paying their customers. Not only can Edgeless now fight off any concerns of fairness, they can also boast that they are fully licensed.

Now that Edgeless are regulated by the Curacao authorities, it may potentially open a variety of doors with the banking sector. First and foremost, if the platform is able to find a gateway between fiat and digital, it has the potential to substantially accelerate the Edgeless user base. One of the main aspects that prevents Ethereum casinos from gaining a larger market share of the online gambling industry is that the average player does not know what cryptocurrency is, let alone how to use it. However, if players were able to exchange their real world funds for cryptocurrency at the point of registration, Edgeless would very quickly increase its volume. To clarify, the more players that engage with Edgeless, the more returns that they will see.

Where next for Edgeless casino?

There is no doubt that the issuance of a gambling license is a major victory, not just for Edgeless, but for the entire cryptocurrency casino industry. However, it is important to note that in the grand scheme of things, Curacao is not regarded as the most stringent jurisdiction for player protection. However, as a member of both the Financial Action Task Force and Egmont Group, Curacao are, at least in name, fully committed to keeping money laundering and terrorist financing away from their borders. This is evident in their ongoing record for KYC (Know Your Customer) controls and anti-fraud mechanisms, which is potentially on par with their trans-national counterparts.

Nevertheless, the acquisition of a recognisable gaming license could potentially be the first of many for Edgeless. The Edgeless management team have signalled to the online community that they plan on approaching other jurisdictions. At the time of writing, the golden ticket could potentially be Malta – who licence over 80% of the regulated European gambling industry. However, according to unverified online discussions, the smart contract casino could also target the Australasian market too.

With smart contract casinos only accounting for a minute fraction of the online gambling industry, the acquisition of a gambling license from the Curacao regulators is highly positive news. Edgeless now have the opportunity to amplify their customer base, by not only offering the first and only 0% house edge platform, but by also being legitimized by an established national gaming board.